opening of new construction in the Norwegian mountains 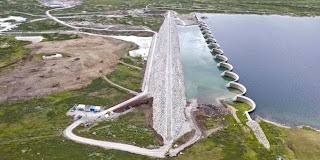 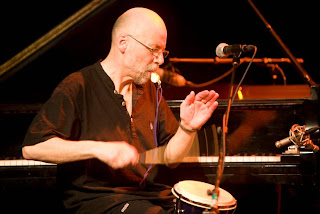 The second band of the evening was the duo of Per Jorgenson and Terje Isungset from Norway, who were playing in a summer context and hence without the Isungset's seasonal utilization of the great natural material of his native Norway—ice. Typically this adds great visual appeal to his music, reinforcing the eerie trance-like atmosphere which the show induces. The music may be improvised, but the structures are well established after years of collaboration. Jörgenson has been involved in Jon Balke's different ensembles, and has also recorded with composer Michael Mantler on The School of Understanding (ECM, 2001) and the Swedish bassist Anders Jormin on Jord (Dragon, 1995). His open ended experimental style has surely had an influence on the younger trumpeters in his country, like Arve Henriksen and Mathias Eick, though more in his exploratory attitude than in any technical realm. In fact on the basis of this performance, it was his vocalizing, as well as percussion and general joy of performing that proved his greater creative strengths. At one point, having earned some applaud from the audience, he turned the appreciation back to the crowd encouraging them to continue in order that he could use this as rhythmic input in his own playing.

Turning an audience's excessive reverence into a performing tool is a welcome approach to the hushed scrutiny that exudes from many experimental stages. Terje Isungset too has also been influential in his innovative approach to percussion, incorporating in his music the sounds of everything from tapped or scraped stones and ram horns to a variety of suspended dried branches. More importantly he reveals an apparent pleasure in the demands that the intensity of their interaction requires, turning at times to the audience when Jörgenson seemed to overstretch the bounds of credibility, and utilizing their bemusement. The duo's power is in their ability to lead the listeners into a highly abstract acoustic world and communicate their own efforts to navigate the creative hurdles they meet.