The icemusictour is going very well.
Many sold out concerts & lots of press coverage (TV, radio & newspapers).
Some photos from yesterdays concert: 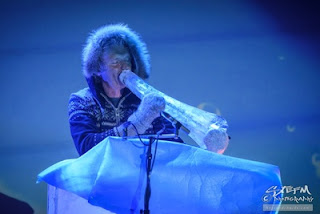 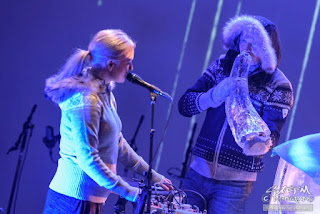 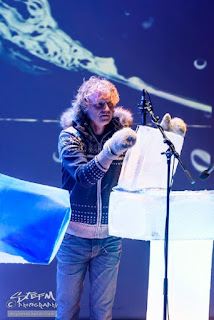 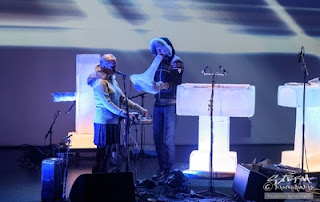 Great audience on our UK gigs so far.
Sold out concert in Nottingham today.
All looking good for the upcoming gigs. The freezer trailer is on its way trough the eurotunnel for tomorrows concert in Belgium.
Here is an interview I made with the main national newspaper of Holland today: 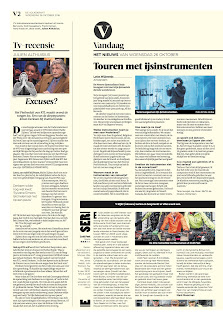 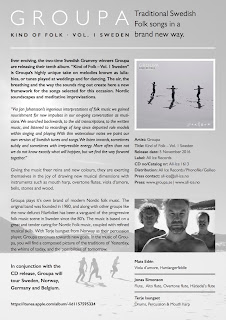 Buy the album at www.all-ice.no
Listen to the music at: https://youtu.be/8Mew05KFDGY
Preorder from iTunes:iTunes
Lagt inn av Terje Isungset kl. 1:11 AM 0 kommentarer

20:00 *Acoustic Icemusic*
Intimate Icemusic concerts in igloos
The students from the Bergen Academy of Art & Design (KHiB) have built a village of Igloos and snow art. This day you will be invited in to a unique atmosphre in the world of ice and snow.
Everything will be made out of ice and snow except for the audience and the musicians 😎 Have you ever heard ice instruments acoustics inside an igloo?
Part one: percussion supremo Ivar Kolve returns for his second year and will perform on his Iceofon (solo concert).
Part two: Amazing joik singer Sara Marielle Gaup performs with Terje Isungset and his complexIcepercussion.
Please note that there will a maximum of 40 people for these 2 intimate ice igloo concerts - so book early to avoid disappointment!
*More Details*
Bergen Academy of Art & Design
Ivar Kolve
Sara Marielle Gaup
Terje Isungset
Acoustic Icemusic concert ticket kr 325,- child kr 150,-
Full festival ticket Thursday 9th - Sunday 11th kr 1250,- child kr 525,-
Day ticket Friday 10th kr 600,- child kr 300,-
Day ticket Saturday 11th kr 800,- child kr 400,-
*Remember your warmest clothes*

15:00 *Family Concert*
The ever popular Bill Covitz show. Joining us from Connecticut in the USA, master ice sculptor Bill will perform his ice carving magic. What surprise theme will he work on in 2017?
Terje Isungset & Maria Skranes will perform Icemusic whilst Bill shows the tricks of his trade.
Performing wintery songs from Finland's heartland, Minna Raskinen & Anita Lehtola-Tollin return with the ice instrument of the year - the Icekantele and lush vocals.
21.00 *Ice Music Party*
Fieh, a fantastic upcoming singer with her ice band - Iceofon, Icebass, Icedrums and singers will channel the spirit of Erykah Badu & D'Angelo with R&B, hip-hop and jazz with tight and elegant beats.
Put on your slippery dancing shoes!
24.00 *Full Moon Concert*
We are lucky to have the Full Moon himself around midnight. Magic light & Magic mood.
The music will be a mix of the duo Arvvas with their music from Lapland, icey sounds from Poland and Terje Isungset's Icemusic.
Sara Marielle Gaup Beska (joik), Steinar Raknes (ice bass) Grzech Piotrowski - Icesaxophone, Maria Skranes (voice) and Terje Isungset (ice).
Lookout for the Full Moon and bring your warm clothes!

By first full moon - on October the 16th - we will lounge the program of The Worlds only Icemusicfestival! (www.icemusicfestival.no)
Taking place second full moon of 2017 at Geilo, Norway.
Today you can read about our festival in The Guardian. 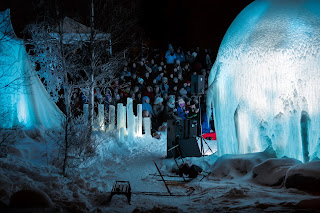 If you do fly British Airways you can now listen to Terjes Icemusic in their in flight system.
There is also a little future in the magazine. 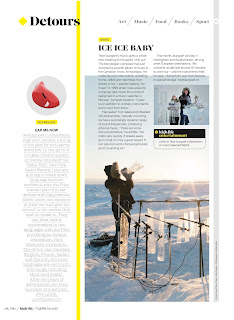 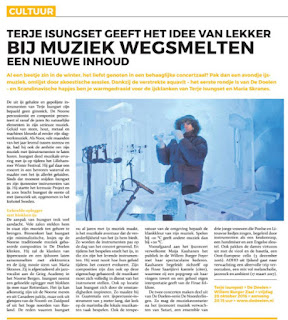 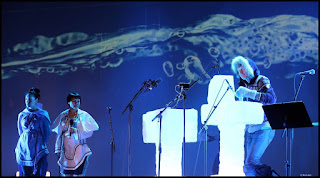